Ed. Note: what follows is the concluding article in the series Chappy has been doing on his years in the ministry, and the final "Along the Path" article. The journey has been long and rewarding. Thanks for letting us walk alongside. 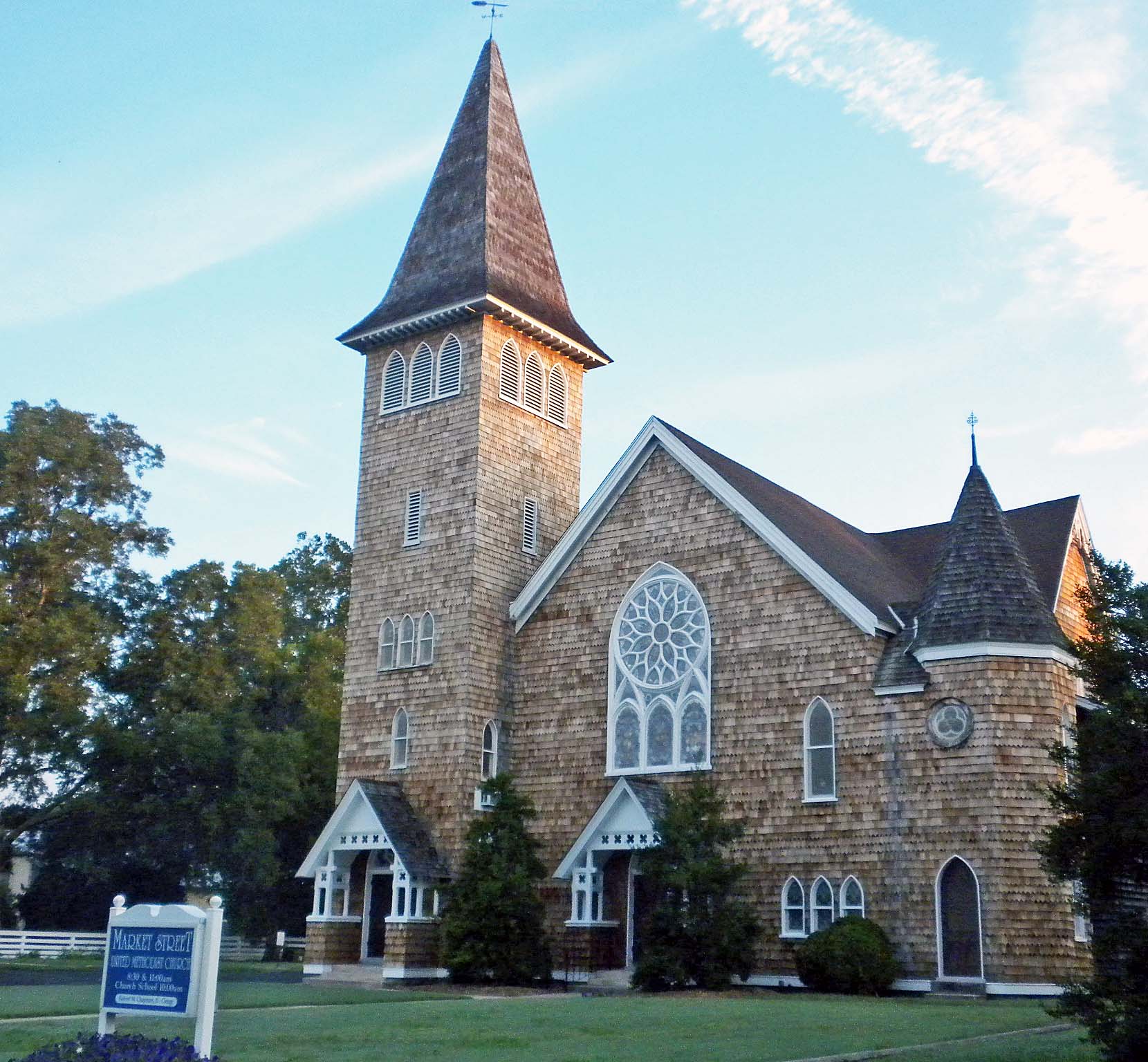 After 12 years at Virginia Wesleyan (1997-2009), my next appointment was on the Eastern Shore at Market Street United Methodist. Years ago, when a pastor was appointed to the Shore, a common thought was that of being sent into exile. It was like you had been excommunicated from the rest of the Conference. Removed from the rest of civilization, a sentencing one might say, perhaps for mistakes made in your career. Having served an extension ministry at the college, Market Street was a good appointment for me to re-enter a local church. I moved into a very large, two-story house once occupied by the town's mortician. On my first evening, after having been taken out to dinner by my new district superintendent, The Reverend Tammy Estep and her husband David, I was welcomed into my new home by several bats -- yes, bats -- flying from the living room into the foyer. Looking back, I cannot help but wonder if that was meant to be a sign. A few days later, we remedied the situation in the evening by having a "bat watch." A number of folks surrounded the house, watching the bats leave for their evening dinner and night on the town. While they were flying out and about, we plugged up the holes in the house from where they had launched. Needless to say, I nicknamed the large parsonage 'Wayne Manor.'

Upon meeting locals on the Shore, a question usually asked is if you are a "come here" or a "been here." I usually replied neither, saying was I "sent here' by my bishop. I followed a wonderful pastor who served only two years. He warned me about the bats. For some reason, the Market Street congregation had a history of short-lived pastoral appointments. My appointment of five years was the third longest in a church history of 150 years. Before I arrived, one of the prominent members took great pride in describing the congregation as being an "ornery bunch," meaning they had a tendency to be ill-tempered and combative. Before my arrival, the church was already involved in trying to discern the applicability of the Gallup Strengths and Engagement Inventory program. The membership of the church was split on its use and concept of effectiveness in relation to the ministry and structures of church mission and programming. I gave my blessing to the program for individuals who wanted to continually pursue its application; however, they wanted me to embrace it more aggressively. The financial backers of its development did not like the comparison of it to the Meyer-Briggs Inventory, which is a wonderful tool for personal self-assessment, actualization and information gathering. Aside from this, the Gallup program did not offer a foundational model toward a biblical or theological orientation for ministry, particularly within a Wesleyan framework for a local church. 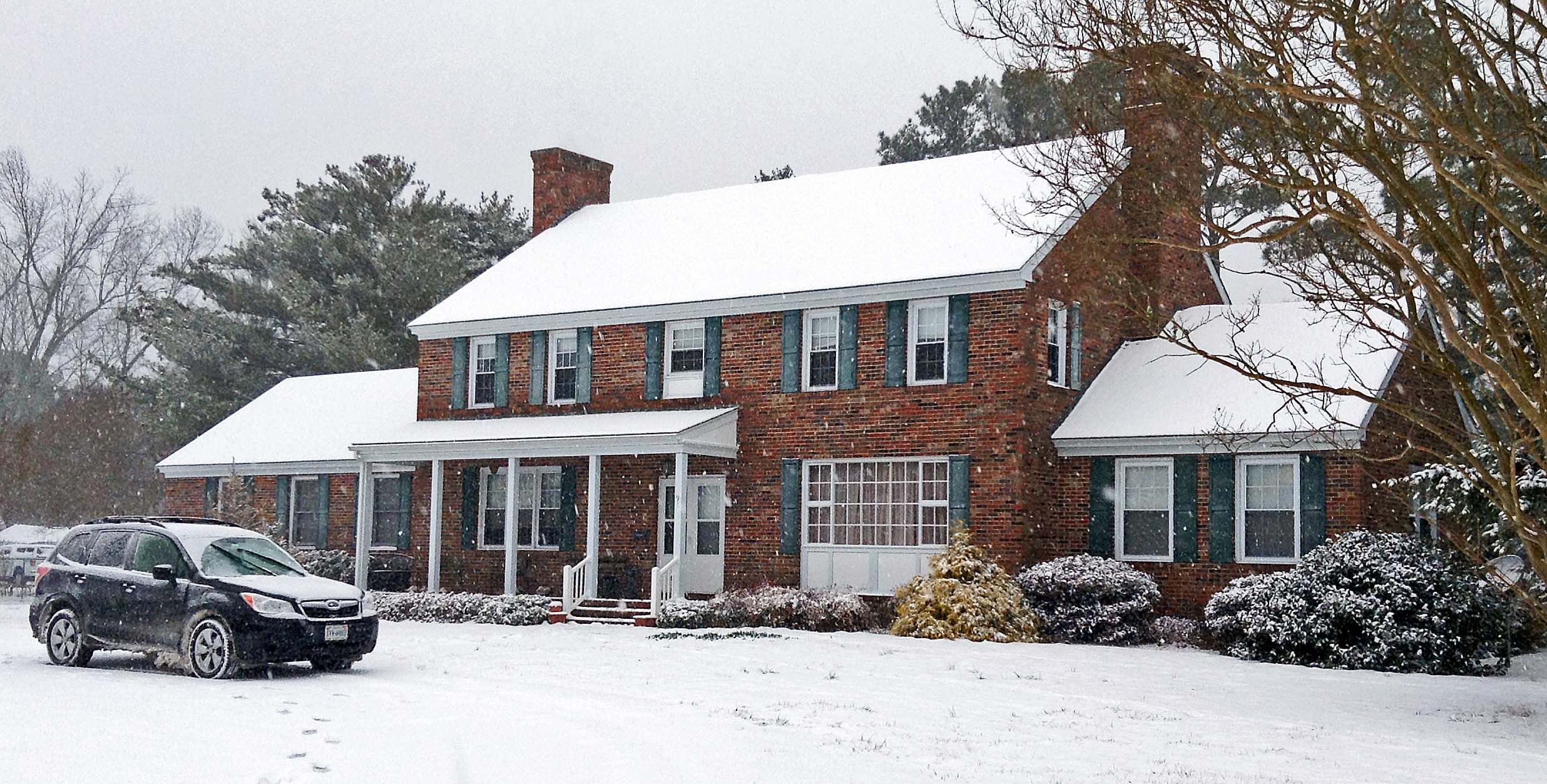 Each week, the church sponsored a wonderful, terrific Tuesday night dinner, with locals coming from all over the community, many of whom you would never see in worship on Sunday mornings. During the summer, we opened our building to a ministry known as YouthWorks, where a team of about five or six youth leaders from across the country led mission work throughout communities on the Eastern Shore. Over the six-week period, two or three church groups, some travelling from other states, stayed for a one-week period in our building, arriving Sunday evenings and leaving Friday mornings. On some weeks, we had as many as 85-90 people residing in our building. Led by Laurice Holt, the United Methodist Women and United Methodist Men at Market Street, had a big heart for mission endeavors on behalf of the community. We supported a number of outreach endeavors to several local agencies including Habitat for Humanity and district Camp Occohannock. With much success, Market Street sponsored the hands-on food mission program of "Rise Against Hunger" which I introduced to Chestnut.

A new initiative begun during my third year was IGNITE. With the recruitment of a few area musicians, we created a praise service in our fellowship hall every Saturday evening. We purchased a large screen, rolled in a projector, advertised with a lawn sign, and before we knew it, we had a Saturday evening praise service. Supported by a few of our Sunday morning church members, the Saturday evening service brought in a faithful crowd of individuals who otherwise had no affiliation with a church community. Every Saturday evening featured refreshments, wonderful music, scripture, a message and Holy Communion. A number of individuals who attended were from a local adult care facility of challenged adults who simply needed a hand. They were very appreciative of our welcome, despite the chagrin and murmurs of some congregational members who did not like the idea of a praise service or their participation in our fellowship. 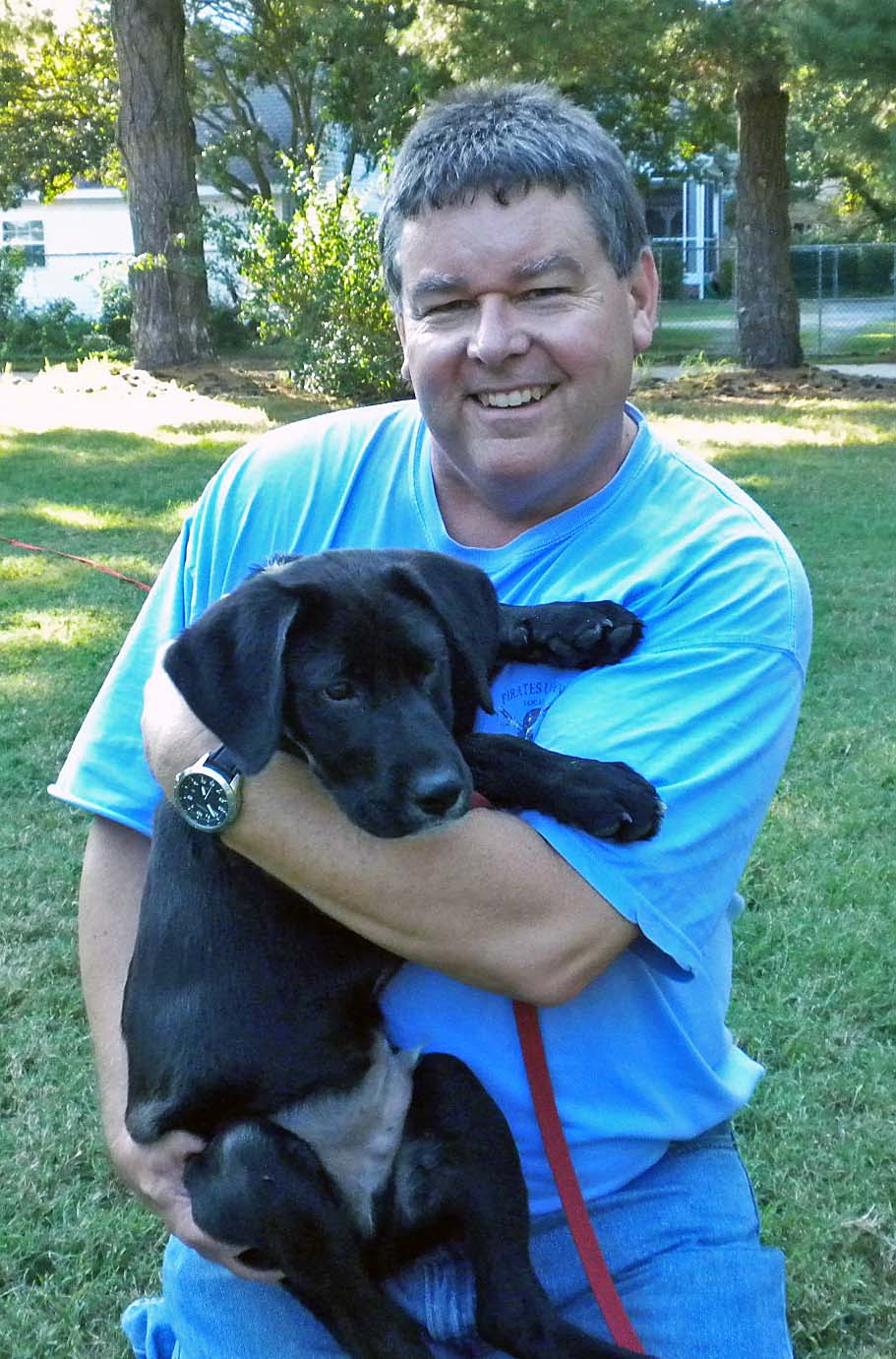 As characteristic of all the churches I have served, the emphasis of my work at Market Street centered on an elderly population, terminal illness, death and funerals. The clinical pastoral education experiences I received early in my career at Suburban Hospital in Bethesda, Maryland and the University of Virginia provided a wonderful foundation for facing many difficult and tragic circumstances all these years. Much of my time has been in hospitals, nursing homes and most often, funeral homes. At Market Street, I officiated at more than 50 funerals for families, developing a wonderful working relationship with the staff at the Williams Funeral Home. Despite the rigor of death and dying issues, the small town of Onancock, sometimes referred to as Mayberry by the Bay, offered a steady contemplative pace throughout the seasons. I enjoyed meeting many of the locals, coming to know them at their stores and restaurants along with the characters at the infamous "Liar's Bench" at the wharf. I still recommend Onancock to people who are looking for a quick weekend get-away. Janet's Café, the Blarney Stone, Bizzotto's, Mallards, The Charlotte Hotel, Scoops Ice-Cream and of course the Corner Bakery, which believe it or not has better doughnuts than Krispy Kreme (how blasphemous of me) are still thriving establishments. Upon my arrival at Chestnut, I greeted the staff with a fresh box of doughnuts from the Corner Bakery. Whenever we wanted a change of scenery, we headed north on Route 13, toward the quiet marshes of Sanford and Saxis, and the beaches at Chincoteague and Assateague. The landscape of the shore offered wonderful settings for my photography, as I placed in a couple of competitions, with one of the photographs eventually finding its way on the cover of Elaine’s book, Hunger for Salt.

A few years after my arrival, a good friend of mine, Elaine McFerron moved to Onancock, renting an apartment across the street from the church. Elaine remained connected to her counseling practice in Virginia Beach, spending long weekends in Onancock, journeying back across the CBBT every Tuesday morning. We felt good about our evolving relationship and decided to get married on Apr. 30, 2011, the day after Prince William and Kate Middleton were married. Perhaps to the dismay of some of our beloved church members, we decided to forgo a wedding at the church, opting instead for a simple and meaningful ceremony near a clump of trees adjacent to the beach at Crissy Field in San Francisco.

In making arrangements for the wedding, I obtained the name of a pastor from the local district office in the Bay area, The Reverend Carol Carter, who officiated at our service. Once again, the United Methodist connectional system came through on our behalf. Subsequently, Carol has become a good friend of Elaine's as a participant in her on-line Yoga Nidra meditation and sacred writing group. Upon our return from San Francisco, the faithful at Market Street welcomed and celebrated with us, providing a delicious reception. The Market Street faithful know how to put a spread on the table, often featuring Walta Pruitt’s crab casserole, (Walta is a native of Tangier Island) and a Shore favorite, sweet potato biscuits. After we were married, Elaine opened what would eventually become a very successful counseling practice, which to her dismay she had to discontinue upon our move to Chestnut. Before she knew it, without any say in the matter, the consequences of marrying an itinerant United Methodist pastor came to fruition. While in Onancock, she also organized and ran several weekend writing retreats. Her poetry readings were available to the community at our mother church down the street, Cokesbury United Methodist. Elaine also continued her work on staff with the MFA writing seminars program at Bennington College in Vermont for the two-week residencies each January and June. 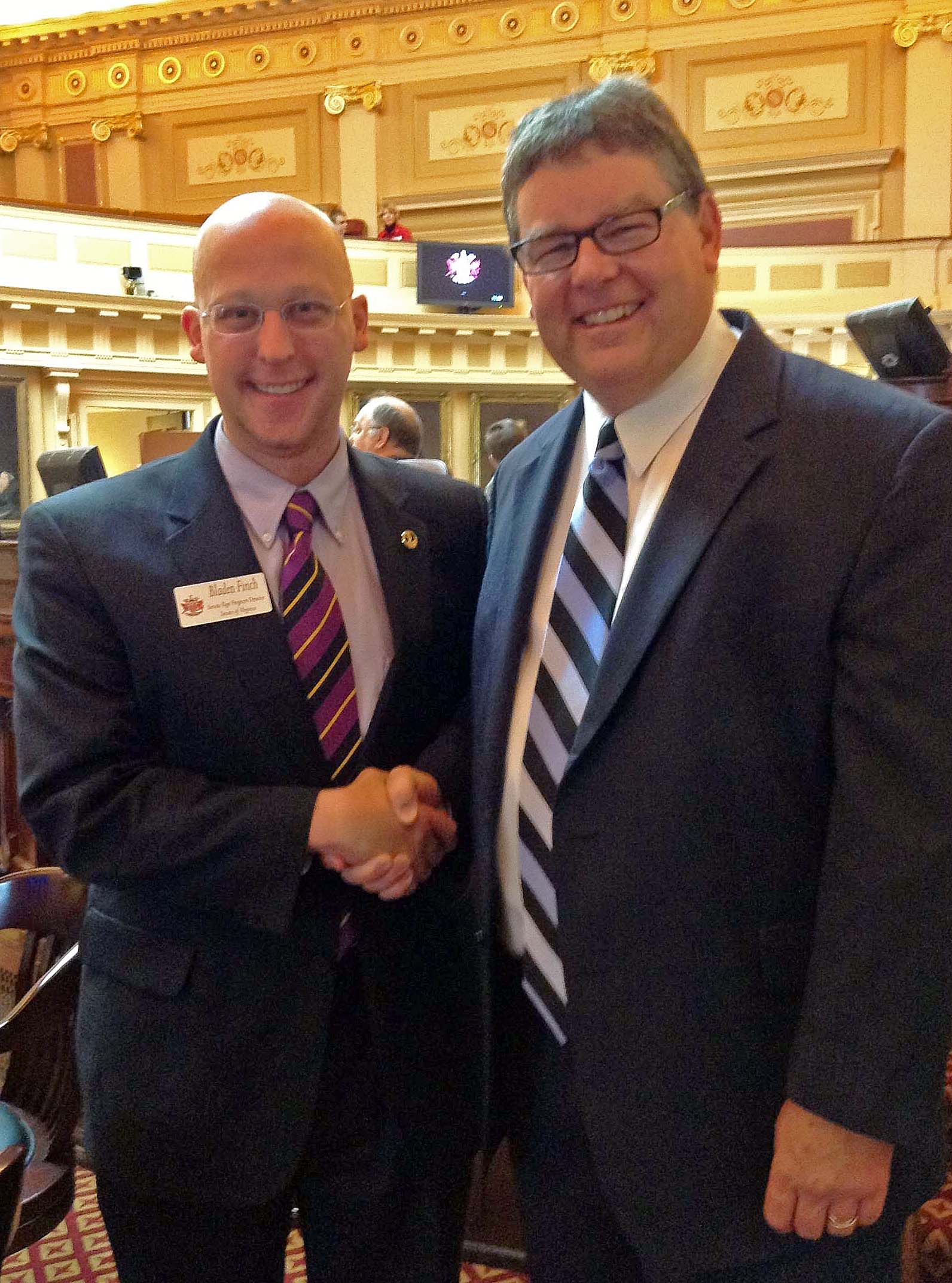 Early in our marriage, Elaine wanted to enlarge our family with a pup. We visited the Eastern Shore SPCA and were met by a little puppy who was already spoken for. His name was Dozer. His sister had already been adopted and he was expected to go too. A few weeks later upon our return, he was still there. We were informed the adoption fell through and if we wanted to provide a home for him, he was ours. Say no more, he came home with us, and thus Elaine and I officially became parents to our beloved Mr. Dozer. There is a theology to his adoption, instead of our choosing him, I confess it was he who chose us, much akin to the adoptive language of God used by the Apostle Paul. There is also another delightful adoption story. A few days before our move, we rescued a kitten in the middle of the road in nearby Onley. After taking him to the veterinarian, Elaine made temporary arrangements for the little kitten. He was eventually adopted into the home of one of our wonderful Chestnut families. His name is Tangelo, and subsequently, the Archer family has never been the same!

One of my great honors during my Market Street appointment, was being invited to offer the opening invocation for the Virginia Senate during General Assembly in Richmond for five consecutive years. Making this so meaningful, was how this invitation came about. A former Virginia Wesleyan student, Bladen Finch remembered the prayers I offered during academic assemblies, convocations and commencement events at the college. Bladen is now serving as the Senate Program Director/Civics Coordinator for the General Assembly. As the Senate was looking for a new representation of clergy to offer opening prayers for the Senate, Bladen could not help but remember and nominate his former chaplain. Who says students don’t listen to your prayers? After the prayer, I would be escorted and seated in the gallery above the Senate chamber, where I would be introduced to members of the Senate by my former delegate and now former Governor, Ralph Northam. It was wonderful having the opportunity to share one of these experiences while having my mother in attendance. A memory I shall always treasure.

In early spring of 2014, during my afternoon walk with Mr. Dozer, I received a telephone call from my district superintendent. From her office window overlooking a parking lot, Elaine noticed something unusual, as I was talking on my cell phone. She knew something within her spirit was on the horizon. I was told I was being considered for a move to Chestnut Memorial in Newport News. Asked if I was familiar with the church, I indicated I remembered it once being served by my good friend, the Reverend Rudy Tucker. From her call, a new path was beginning to emerge, thankfully without the presence of bats. Instead, a welcome of herons, egrets and eagles. And as they say, the rest is history.